While I was watching Madoka, I heard it compared to Bokurano, which I have enjoyed immensely. So when I saw Bokurano volume 1+2 at the library, I instantly grabbed it up. Upon completeling the two volumes, I then looked for the scanlations online, as I really wanted to know what would happen there.  Bokurano, while comparable, is nothing like Madoka, and a manga series that I’d say is almost if not completely original. I don’t think I’ve ever read anything like it. It also turns out that while there is an anime, the story of Bokurano takes a different turn halfway through, so the manga of Bokurano is a different experience then the anime.

Summery: 14 boys and girls, meeting at Nature School, sign up to play what the merely think is a game. That game turns out to be all to be real, however, whenever they discovered they’ve signed a contract in which they are given the chance to pilot a giant robot and protect the earth from an invading alien. The catch is the robot gets it’s energy from it’s pilots, and kills them after they finish piloting. However, they don’t have much choice. If they lose the battle or don’t fight, their planet will be destroyed. In this manga, it’s pretty obvious from volume 1 that every main character will die.

The main difference between Bokurano and Madoka is this. Madoka is a story-driven work for of metaphors. Bokurano is more physical, straight-forward, and character-driven. It asks the questions “If you could save the world at the cost of your life, when you’re young with your whole life ahead of you, would you?” and “If you knew you were going to die, how would you spend your last days?” and let’s the characters answer it with a wide variety of answers. As the story changes from character driven to slightly more story driven, the questions the characters have to answer become harder ethical questions, while at the same time the world has to cope with the sudden appearance of a giant robot wrecking buildings and killing people. 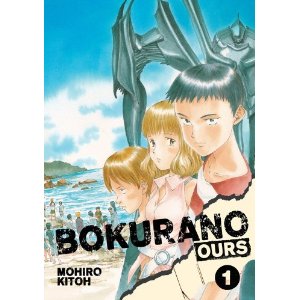 END_OF_DOCUMENT_TOKEN_TO_BE_REPLACED

Dedicated to all kinds of stories.

Another Night of Reading
It's YA Girl Reviews

Life and it's Possibilities

A chance to change your life

On a personal mission to read all the sapphic books & more.

no matter the genre, there's a little magic in every book.

The Inked In Book Blog

Just a girl trying to write something worthwhile.

✨ reading (and judging you) behind a pile of books ✨

Discovering new Worlds and Guides for Travellers into Stories

My fingers are moving, but it appears as though my characters are writing themselves

Drizzle & Hurricane Books - A hurricane of ya books, a drop of blogging and a whole lot of feelings

YA lit and more!

Queering up your shelf, one rec at a time!