Things have finally come to an end, and I personally enjoyed the ending. However, I still have a lot of thoughts bouncing around that will all be covered here.

The metaphor of growing up: The theme of Madoka is not growing up, but hope vs anti-hope. Scamp does an amazing job of explaining how it works, and I wouldn’t be able to do nearly as good a job as him. However, as I mentioned earlier, all magical girls anime are metaphors for growing up, with the magical girl being the vehicle through which one grows up, and Madoka’s is no different. However Madoka presents a slightly different view to it, with it looking very glamorous, but once you become an adult, you find there’s many challenges, unpleasant truths, and no ways out.  With the story now finished, the metaphor that I started to puzzle out can now be understood better.

Basically, being an adult isn’t glamorous. Being an adult is really fucking hard. You start out working for a dream or wish, and it either goes wrong, or you gradually comes to realize the realities of the world and have to readjust to fit the confines of the world. It’s a struggle, and it never gets easier. But as cheesy as it sounds, the message of Madoka regarding adulthood is that you find yourself walking the path to being an adult one time or another, and joining the ranks to fight for what you want. When that happens, try not to fall in despair and lose hope. Because if you do, it will destory you. Although cheesy, it’s true. 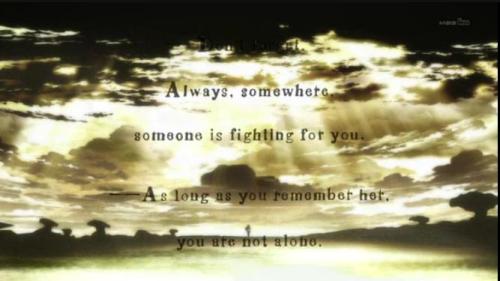 I still feel that there’s the warning against rushing into adulthood to quickly. After all, Madoka waited until she was ready. Because she waited, she was able to make the right wish and one-up Kyubei, which was the best come-upponce we were going to see for Kyubei.

I know the writer worked on Fate/Zero, but the resemblance was really uncanny. I’m going to think Saber is magical girl from now on.

No, Kyouko did not really have a role in the finale, but I thought her nonetheless. Although with what happened, she got to live, Kyouko got the short end of the stick, with her sacrifice becoming moot, and losing Sayaka anyway. Sayaka never even acknowledged Kyouko, instead still being obsessed with Kyousuke. Oh well. It does seem that Kyouo and Mami were getting on well in the after life. Maybe they can be lesbians together instead.

Also, it seems that Kyouko must be one of the toughest magical girl. A magical girl appears to turn into a witch when they lose hope, yet Kyouko hasn’t despite everything that’s happened to her, and when by all reason, she should have. Instead, Kyouko has managed to keep on fighting for who knows how long…she appears to be from a different time period altogether, as many have pointed out. I’ll be very interested in her story in the prequel manga. 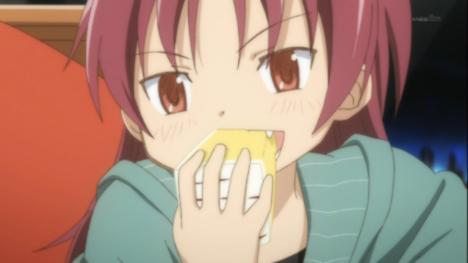 Kyouko and Madoka were having cake with Mami...

Was Homura in episode 11 bad-ass, or was she bad-ass? Poor poor Homura, all she wanted was to save her friend and be with her. Instead her friend became a god and ascended to higher plane of existence, leaving Homura behind. I do hope that when Homura eventually dies (though if Kyouko, above, is any example, it may be a long time) she’ll be able to be with Madoka. In the end, Homura never got what she wanted, but it was thanks to her that the universe was saved.

One question remaining is the wings we see on Homura in the end of the show. I like an interpretation I saw on Psgels blog, that it signifies that Homura is carrying the despair the Madoka should be carrying so Madoka doesn’t. It makes sense, as Homura as the only one who remembers the way things use to be, as well as all her other time lines. In the end, Homura appears to be allowing her to express emotion that she’d stopped letting herself in the end. 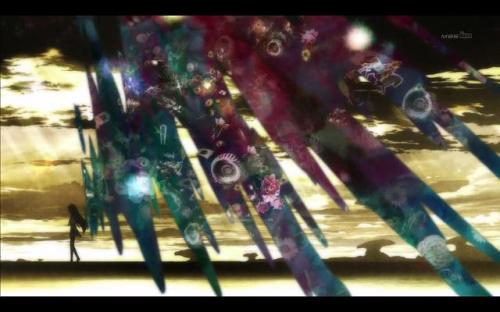 In our society, we already look down on emotional reactions as a flaw and weakness. Just recently, I read an article about how grieving too much or/and long over losing someone was starting to become classified as a mental illness. Worrying too much is a mental illness, etc. Yes, there are cases where things get out of hand and too extreme, and medication is needed, but at the same time, we’re too quick to slap the label of mentally ill or unstable of an emotional person. Kyubei’s society seems to be the product of that mindset–they consider any expression of emotion a mental illness. 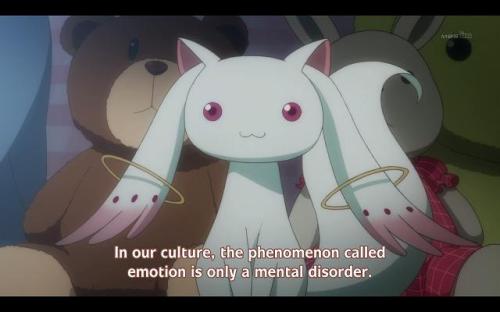 The World Has Changed

What I find the most interesting about the world about Madoka is now it’s almost a normal magical girl world. Except Kyubei is still an emotionless alien and magical girls lose their souls. Well, if it was a happy ending and everything could be fixed, that would be a big letdown, as it’d lost all sense of depth it had.