Why I Love/Loved Madoka Magica

Scamp recently did a post pointing that Madoka is coming to a close soon, and that while it could have a glorious ending, it also could completely tank. Thus he wanted the post out there to remind him, should the show tank, there was a reason he loved the show. I thought that this was a fabulous idea, fabulous enough that I wanted the same little memo for myself in case the ending tanks.

Yeah. This is NSFW under the cut.

Oh the yuri undertones. There’s so much subtext–in the final battle between Sayaka and Kyouko, the two form a heart–that if anyone wants wants to ship the characters together, there’s plenty of reason to, yet none of the context is sexual. No “I want to grab your boobies!” or, “I want to take a bath with you!”. Just innocent subtext.

When Madoka Magica started airing, Homura’s identity was a mystery. Homura had a fascination with Madoka that quickly leads to an on-set of fanart of the two together. Yet there were so many different theories of who Homura might be, from Madoka to a cat to Madoka’s mom. Admittedly, a lot of people, especially in Japan, don’t have have a problem with incest, but I do, especially when it involves getting on with one’s mother. Luckily, there turned out to be no forbidden love happening.

Homura is just one of Madoka’s classmates. Which means fans can ship without having to worry about incest /bestiality etc. If that’s not a wonderful gift from the creator to the fans, I don’t know what is. 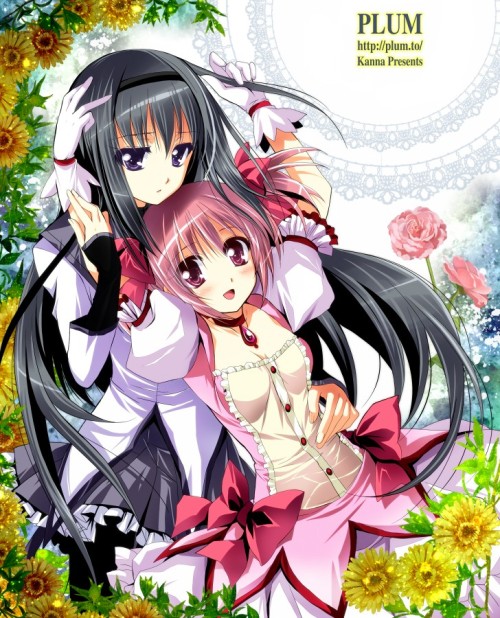 Come on, those are some lovely ladies! Not too big, not too small, but just right. Rarely do boobies that lovely grace the scene of an anime, and usually when they do, you’re sick of them by the end because they’ve defied the laws of physics too much. Well not these babies!

10 responses to “Why I Love/Loved Madoka Magica”

Musings on cross stitch and life

Changing How We Work One Step At A Time