If this game doesn’t prove there’s definitely more to videogames then shallow fun, then nothing does. Grace’s Diary is the product of a contest hosted by JenniferAnn.org challenging game developers to create a video game about domestic violence without any actual violence.

Grace’s Diary, is the masterpiece among all the games that can be found on the site, takes about 20 minutes to play, and is very chilling. 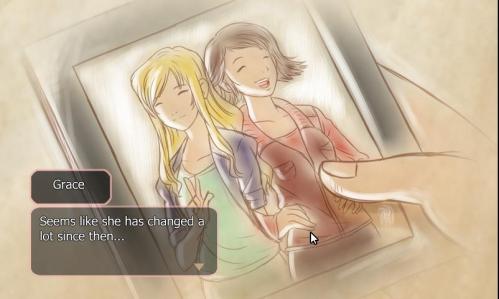 Grace’s Diary is a point and click visual novel revolving around Grace confronting her friend about her abusive friend. The art is amazing, with watercolor colors and an art style reminiscent of Hotel Dusk.  The soft colors don’t soften the subject matter, and while true to the contest guidelines, there is no violence, this a game that doesn’t hold back, immersing the viewer into the dark world of teen violence. It doesn’t just tell the player, “This is what abusive relationships are like and have facts about abusive relationships.” but instead paints real-life situations that teenage viewers can relate to.

Surprisingly subtle, the game works not only to teach the player how to recognize they’re in an abusive relationship, but how they can their friends may be being abused.

What really stands out above all is the mature and realistic approach the game takes. The only character who feels flat is the character of Ken, the abusive boyfriend. Otherwise, everything is spot-on. It’s hard to know what to saw to Natalie, Grace’s friend, and her struggle feels your struggle. It’s not easy to make a victim admit they’re being abused, or easy for the victim to leave the relationship, and I like that this game shows it’s not black and white. It’s like walking on eggshells. Say the wrong thing, and Natalie will hang up, then it’s over. I got a game-over screen because I lacked an essential piece of info to keep her on the phone, leaving Natalie to tell me, “You’re overreacting, it’s not that bad.”

The game has three endings, and I made sure to get all three. Seeing all three, and being the victim of an abusive relationship, all of them have an important points.

This isn’t the type of game you play for fun. I can’t even say it’s fun. It’s too upsetting to be a game to play for fun–although a game about abuse shouldn’t be fun–though Grace’s positive nature keeps it from being too dreary.  The game serves an important purpose, as it addresses an issue with youth not being talked about or taken seriously in a medium that it’s easy to get into, and get educated. The player feels for the characters, cares about their fate, and comes out feeling worn out from the ordeal. 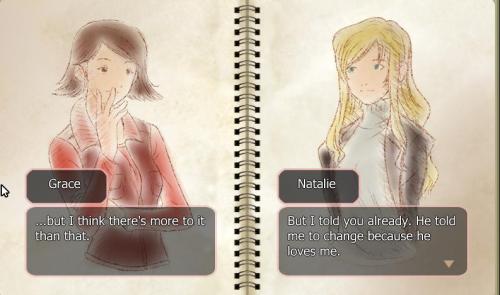 Musings on cross stitch and life

Changing How We Work One Step At A Time