My History With Anime

Apparently there’s this history with anime project going around, started with Nopy,  and I suppose I contribute my piece. I don’t really feel my story is that unusual or different then anyone’s else, so I don’t promise a compelling story, but if you want to know how it started, this is the story.

One hard thing for me is between a lot of repressed memories and a seizure disorder, a lot of the details, such as later in the tale, the order in which I watched the anime, I’m not really sure of. But I’m doing the best I can here. 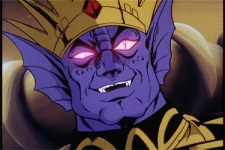 As far as I can remember, I’ve had an interest in animation. My favorite movie growing up was Toy Story. I was also surrounded by it, as my parents attended Sci-fi and Fantasy conventions. Entertainment for youngins meant coloring books and all sorts of animations. The first actual anime I can remember watching was Toonami’s Voltron/Go Lion. That was until my mother told me I wasn’t allowed to watch anymore because it was too violent. I didn’t care so much for the violence scenes anyway…I just lion mechas was the coolest thing ever.

Luckily, being banned from Voltron didn’t leave me deprived forever.  When the pokemon craze started, I pooh-poohed the tv show although I loved playing Pokemon Red. Yet sometime in Second Grade, after church, I caught half of an episode of Bulbasaur and the Hidden Village. From that point, I was hooked to the anime. I would be until Ash went to Johto, when I lost interest, and then regained interested in the second half of the Hohen Adventures. But for the time being, Pokemon most definitely kept me enthralled.

And then, and I’m not sure how, it was Digimon. Then Yu-gi-oh. I just ended up following the trends and what happened to be on TV that was animation. The next anime I started watching was Yu Yu Hakusho. That I got into it thanks to the publication of Shonen Jump in fifth grade. At the time, I played the Pokemon TCG with a group, and we ended up the preview magazine. I subscribed, and grew so fond of Yu Yu Hakusho that I started watching the anime.

From there, Middle School happened, and slowly I started to branch out. Mostly I just read what comics and manga I could get from the library, but my friends hoisted on me a couple. Some I enjoyed, some I didn’t. Most notably, the anime series Fruit’s Basket, which was all the rage at the time, and the Miyazaki films, Spirited Away and Princess Mononoke. While I liked Miyazaki, I’ve never been able to get totally into Fruit’s Basket. The beginning was funny, but something about and especially about the main character just bugged me.

Sometime during middle school, I was lucky enough to see Howl’s Moving Castle in a little arts theater on the movie screen. I was a big fan of the book, and while the story was flawed, seeing animation of that quality on the the big screen  was an unforgettable moment.

Luckily, my library had a fantastic anime collection to supplement my curiosity. In 7th and 8th grade I burned through Fushigi Yuugi (great first half, terrible second half), Blue Seed, Revolutionary Girl Utena, Nadesico, Noir,   and Gundam Wing. One piece of work that stood out to me was Millennium Actress. I thought a movie would never make me cry, and I was proven wrong.

Yet this is all a lead up to my summer of my 8th grade year. Two things happened. One thing was that I spent that summer in a cast. The cause was mysterious case of tendinitis, a prelude to what was to come, I guess. My foot couldn’t have strain on it during the summer. But I’d never have a cast before, so it was exciting in a way.

The second event was the formation of a friendship with a very infamous and now just sad figure on the midwest con scene, the conchair of Anime Punch. I would come to be stuck in an abusive relationship with the possibly narcissistic probably Borderline Personality Disorder and definitely alcoholic guy, but at the time things were different. His drinking wasn’t as bad, and he hadn’t taken the nose dive off the crazy end yet. Anyone who knows him would probably agree, but it’s weird to remember him before he changed so much. He use to be a different person anyway.

Through him, I was introduced to a lot more anime, and since I was stuck on the couch, watched a lot that summer. Still anime I got from the library. My library is pretty amazing. That summer, I finished up Noir, as well as watching Nadia: The Secret of the Blue Water, Last Exile, Haibane Reimei and others. Unfortunately, my memory is hazy, so I can’t remember everything I watched. But after that summer, I was officially hooked onto anime with a real passion and dedication.

From there, a big black hole engulfs my memory, with a few exceptions, spitting me partially the spring of my junior year and completely the summer before my senior year.

Funny thing is, I never torreted any anime or really watched anime on the computer until I started blogging. But the day I became a became a blogger is when I finally decided to start torreting. The second season of xxxholic is the first anime I torreted.

Oddly enough, I’ve never called myself an otaku or identified myself as being one. I don’t think I know enough about the medium yet to deserve the title, nor is it my sole interest. But it’s become a part of who I am. Unlike most of my friends who eventually lost interest in anime, and moved on to things such as Supernatural, I’m still a big fan.

I do find it very interesting just how heavily anime has tied into the important parts of my life. If it wasn’t for anime, I would have never have met the Conchair. But I would have never ending up blogging if I didn’t need to find an escape until I could get out. I wouldn’t have gotten close with my current boyfriend if we both didn’t like K-On. And then thanks to anime, I’ve ended up blogging, which has lead to me trying to work on my writer, when I’d give up on ever being a writer years ago. Not that I think I’ll ever be published or anything, it’s just as I blog, I’ve remembered how much I love to write.

It’s funny how it all works out.

13 responses to “My History With Anime”