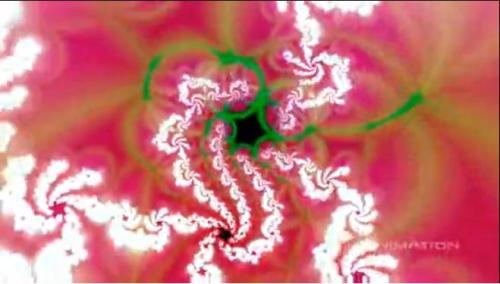 I love the opening, and how it's full of fractals.

The most fascinating part of the world is hands down the world of Fractale. It’s a futuristic world where the ideal of a utopia has been achieved, but at a cost. People, with everything provided to them, no longer need each other, and as such, have nothing to do with each other. While there is no explanation behind this (yet) the first episode leads to the conclusion that in this world, one can create one’s own friends and family–that, or rather then interacting in person, they interact through virtual avatars. 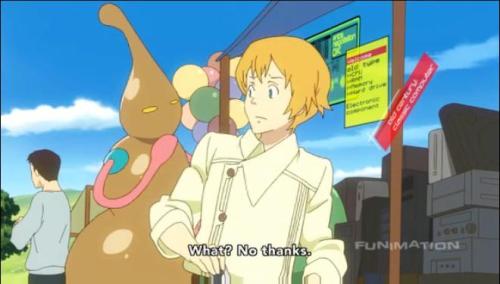 I’m not sure what to make of the story though. Maybe I’m still processing it. The boy runs into a strange girl on the run only for her to disappear and be replaced by another strange girl. Our main guy lacks any real personality at this point, and is going to have to develop more for me to like him. I felt like through executing the story this episode, they spent too much time on a couple of pointless things. I understand it makes sense for a guy to panic after seeing a girl for the first time nude and touching her. But at the same time, having to put up with the freak out process multiple tunes is annoying. 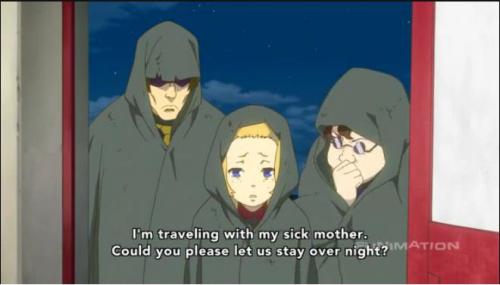 I did like these guys repeated attempts to get in the house. I thought it was kinda funny.

I absolutely love the animation. It reminds of Miyazaki’s earlier days, and the simplicity really works for me.

In the end, I can see this going either way. This could be a masterpiece. Or a disaster. We’ll know in ten episodes.

Tagged as nothing is as funny as a boy seeing a naked girl!, What the heck did I just watch?