The first episode of Dragon Crisis reminded me of the movie “Garden State”. “Garden State”, if you looked at the bare bones, was a chick flick. However, the way it was executed made it feel like more of an artistic film with gorgeous scenes and strange shots.

Dragon Crisis is the basic harem anime with fanservice thrown in here and there, although it attempts to have more depth with a stab at a fantasy story. Yet it’s presented in a very artistic fashion. 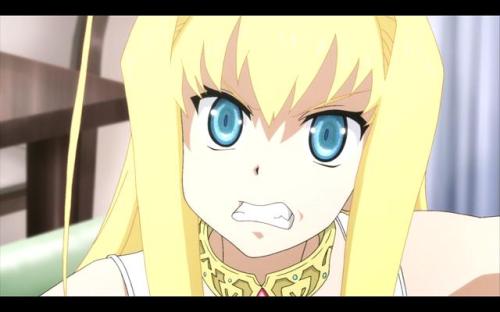 Dragon Crisis has insanely gorgeous artistic values. The soundtrack is stand-out and really fits. The animation style is unusual, fluid, and for the most part, downright beautiful. It’s rather odd to see this type of animation, rather then present a deep and meaningful story, being used to show off a boob jiggle or a butt.

Beato the Golden Witch is the one actually trapped inside the staff.

Otherwise, there’s nothing special about this. As I said earlier, it’s typical harem faire. There is a stab at a plot, but the plot makes absolutely no sense, and while further episodes might make sense of things…I’ve watched enough anime to know this is an unlikely bet. In the end, the only thing that really makes this worth checking out is the high artistic values.

Unlike a lot of people, I actually like Rose just fine. Even if her talking skills are quite limited, she’s still quite expressive, and I found her pretty cute. I viewed Rose as a little girl rather then a teenage girl, but I think that’s how she is meant to be viewed. 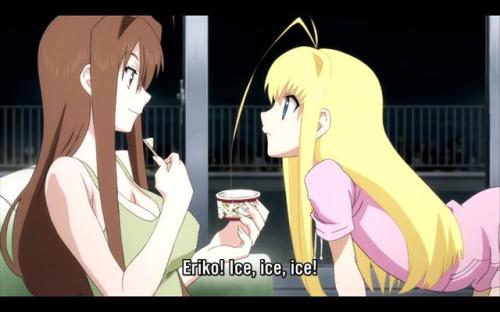 Otaku Life thought it was okay, a bland first episode.