12 Days of Christmas Day 11: What Do You Mean Girls Like Sex?

In 2010, there have been female protagonists with an interest in sex just for the pleasure of having sex. Not that they’ve been really portrayed that positively, and rather, are suppose to be protagonist we laugh at because of their crazy antics. Still, I think having girls that like sex as protagonist is a move in the right direction—especially considering the sexism present in Japan.

Some noteworthy girls this year.

Yamada of B Gata H Kei was a virgin who wanted to sleep with 100 men. Sadly, by the end of the series, she hadn’t slept with even one, the ever suffering Kosuda. Still, her level of obsession will the topic of sex was quite phenomenon, and caught many people by surprise. Also, 2chan hated it. No surprise.

Panty and Stocking of Panty and Stocking with Garterbelt. Panty’s whole gig is she is obsessed with sex. All she wants to do is have sex with anyone that has a penis. She’d do nothing but have a man give her orgasm after orgasm if she could. There’s nothing more to say here. The character whose sex life is more surprising for defying expectations is Stocking. She’s not obsessed like Panty, but she still has a sex life. Hers is similar to that of a normal college student or adult—if someone strikes her fancy (or she wants to piss someone off aka Panty) she’ll sleep with them. Stocking is unrealistic in other ways, but she’s actually realistic regarding sex. I caught onto to this rather early, but it took rest of fandom awhile to catch up. A portion of 4chan hated it. No surprise. 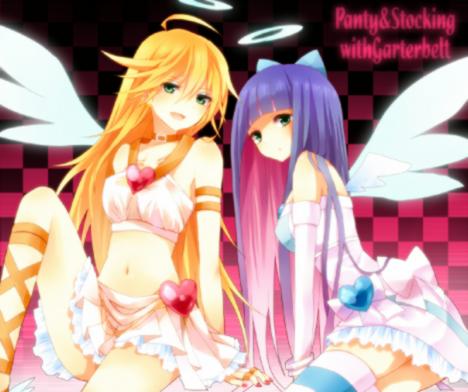 Kirino of My Little Sister Can’t Be This Cute isn’t going out and having sex. Instead she stays in and plays eroge games. I can understand this, her sexuality is starting to blossom, and she’s just exploring it in a different way. There’s no denying though that she’s a girl that likes eroge, and that is not something that’s admitted to very often. (In matter of fact, all the otaku of My Little Sister are girls, but that’s another topic for another day). So I still count as Kirino as female character with an interest in sex. I’m also the same person who pointed out that there are many reasons to play eroge games and enjoy them. Judging by Kirino’s fanfiction though, she does somewhat like/is curious about the sex part. Also, even if Kirino enjoys eroge games for other reasons—and I’m sure she does as there many aspects to enjoy—there is the implications that the viewer will automatically think of when seeing a character that loves eroge, and it’s still a daring move. My Little Sister Can’t Be This Cute is surprisingly popular.

And then there are the two sisters of KissxSis which are definitely interested in sex and although I didn’t watch, I heard about it. I think it was liked by 2chan, surprisingly.

So yes, kudos to anime this year for not only giving us girls that likes sex as good guys. Also there seems to be a message here that fans don’t really like it if a female character is into sex…unless said character is attracted to her brother. Somehow, I’m not surprised. Thanks Japan.

Filed under B Gata H Kei, My Little Sister Can't Be This Cute, Panty & Stocking With Garterbelt