Alright. My current theory about this world is that this world consists either of a world of suicide victims, or people who wanted to die. What the goal of this world is, to put them in a better situation, or help them accept their lives, or what not, I’m not sure. Maybe it this world, ‘God’ gives them the ability to reach their potential and atone for throwing away their lives before letting them move on. It seems to be shown in this episode that as soon as a person reaches a state of happiness, they ‘disappear’, either moving on from purgatory into the next world, or reincarnating. Being religious myself, theorizing about what this anime is saying with my prior opinions, and especially where this show was created in a land with a different national religion, it’s hard. 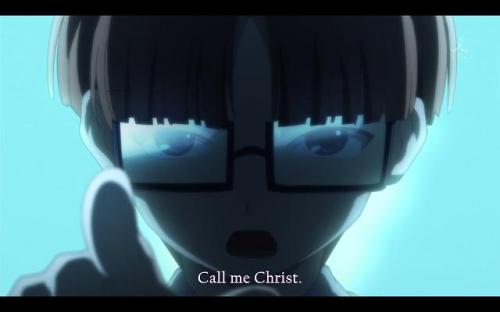 This episode focused on the Diversion section, where as last episode focused solely on Yuri’s division. I didn’t find Iwasama’s story as compelling as Yuri’s, but I still really liked it. Except how she ended up mute didn’t quite click in mind. Regardless, the way she phrased her last statement made me think the stroke didn’t kill her, just that she gave up the will to live, or killed herself. The state of happiness she reached at the end of the episode was beautiful. 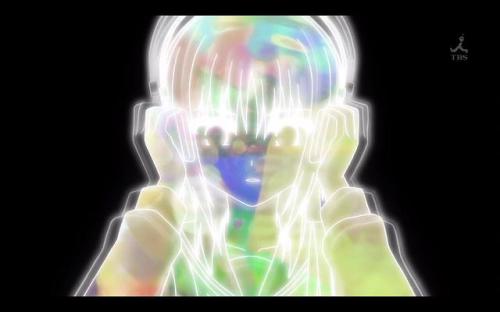 The songs Otonashi sung were great as well. There was actually time spent on creating the songs, and they tied in well with the story. There will be copies of the song available, like with K-On, I hope?

A few other things stood out to me in this episode. The scene where Otonashi realizes that getting use to a weapon is something he shouldn’t be doing. Yet, he is. For a moment, he realizes the weight of what’s going on. 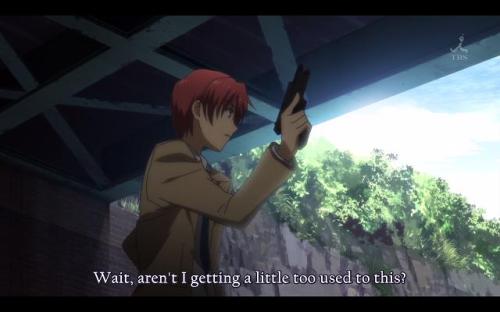 The other scene I really liked was that brief moment of humanizing Angel, when she shows the first sign of having emotions. She muses over being placed in the position of the bad guy. I think she’s going to become a more sympathetic character, through Otonashi befriending her. The fact that she just lives in an ordinary school girl was not something I was expecting. 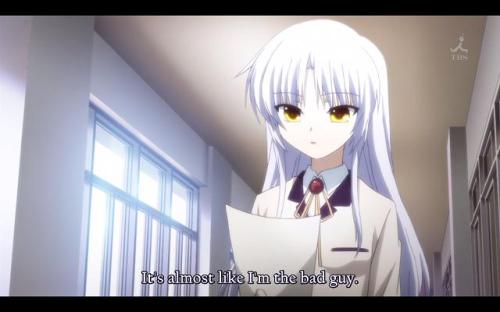 The oh so blatant Howl’s Moving Castle reference was cute.

10 responses to “Angel Beats 03: Let’s start with the theories”