Seriously, wow, what an episode. This is definitely the strongest one I’ve seen so far. While I was sure this show won’t pull any punches, it was confirmed in the opening scene of this episode.

Sometimes there is nothing even I can say

I was recently talking to a Sora no Woto fansubber who pointed out to me that they thought Filica was the incorrect spelling, but rather, Phylicia. I will now be calling her that. 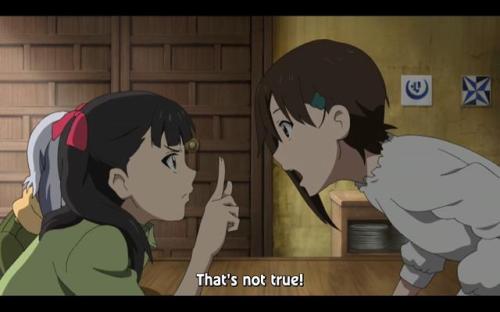 I wish all religious arguements were this cute.

Anyway, we found out quite a bit about Phylicia’s past in this episode. She appears to suffer from Post Traumatic Stress Disorder and flashbacks. Not that I can blame her. The imagery in her flashback was truly horrific. The arm of her fallen teammate. The destruction of the cities. The large amounts of death around as she stumbles to escape. The mummified solider. This flashback is an example of imagery at its best. Words aren’t needed. All that is needed is the pictures. There’s also no denying the huge amount of pain and grief that would have surrounded this fight. 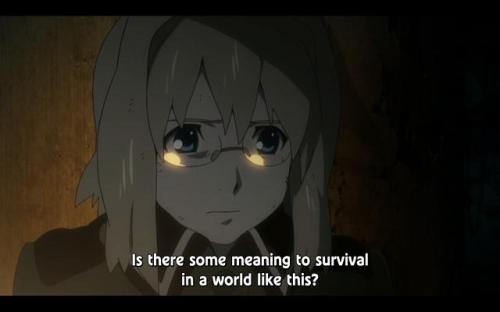 The show finally tells up what the war was about. It’s not man vs. man, but man vs. something else. What that something else isn’t revealed, but Psgels theorizes that it’s man vs. machine. My gut reaction is aliens, but that’s because I play too much Bliss Stage. I think he’s right. Whoever it is, there are more technologically advanced then the humans and hard to defeat.

My curiosity returns out the mysterious blonde maiden who turns out to be a princess. A princess being on the battlefield was surprising, but not completely unconceivable. Having a hero on the battlefield that people can relate to can have a positive effect on morale of civilians. They also may be that desperate for people at that point.

It was very surprising that Phylicia would have such a dark backstory, but she’s come to terms with what has happened I think, evidenced by her conversation with Rio at the end. An absolutely great conversation that I thought was really powerful.

Back to the current time in the episode, watching everyone get together to celebrate a holiday for the dead was bittersweet. Watching the orphan draw her parent was a little unsettling. I understand the huge amount of death in this world, but I’m having trouble getting use to it at the same time. This holiday must be extremely important to the people of the world as they’ve lost so many people.

The only weak part of the episode was the over the top emotional moment between Phylicia and Kanata at the river where Kanata isn’t crying. To me, it just didn’t meld with the rest of episode. Luckily it really didn’t detract from the overall episode. Just a few moments of some eyerolling, and the hug of the four girls was cute enough to make up for it. 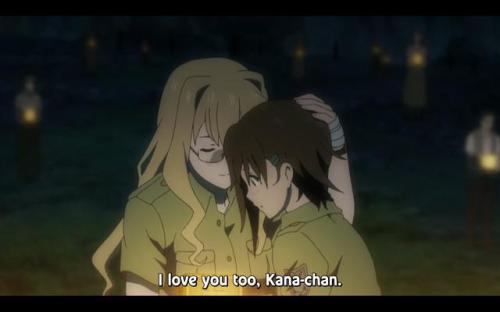 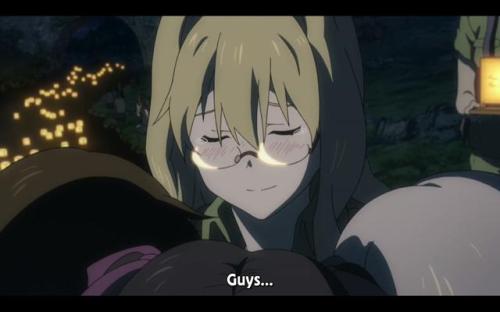 And then she gets a harem.

Filed under Sora no Woto